How I know we've arrived... 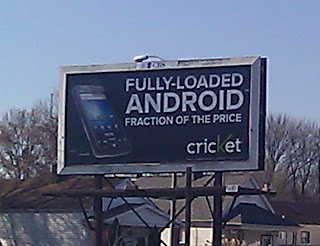 This was the billboard today as I walked.  ANDROID all big and bold like that, gives me shivers. 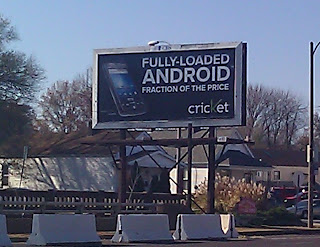 from: will Ø @ 12:08 PM No comments:
Email ThisBlogThis!Share to TwitterShare to FacebookShare to Pinterest

Though I may say it in a jovial manner, the following statements are not made without context:


from: will Ø @ 5:57 PM No comments:
Email ThisBlogThis!Share to TwitterShare to FacebookShare to Pinterest

I was walking, listening to Critical Hit, and having had the NPR: Science Friday podcasts about Voice technologies (with Google) and another with Microsoft Kinect, I bemoan the days in which I could set aside a weekend to play Dungeons and Dragons and other role-playing games.

Putting aside the time concerns, how might one use future technology to play highly adaptive and creative collaborative games in the future.  World of Warcraft has become as popular as it has largely, imho, due to the ability to let people participate in this type of bite-sized collaborative adventures as time permits.  But a problem I discussed with my children years ago was the fact that Blizzard has to constantly refresh content to keep the game from becoming stale.  The promise of systems like Second Life was that it let the users provide that content.  The balance act is to promote quality and let the gamers dictate their own pace.  While WoW has added content that keeps a market tested segment satisfied, what about those that fall outside those market parameters?

How do I set aside a weekend again, even if it's broken up into 60 minutes episodes across the span of a month?

Of course, I could break off and create an Android app for Character Sheet

The character sheet is a form, updated RT, hosted via Google Docs, the player of that character has his open on android, the DM has his open in a tab.

Players are engaged in a video chat via Kinect.  Dice rolling takes place by stating "roll 3d6" and doing a dice roll motion with the hand.  The dice roll across the screen for all (color coded to the player perhaps).  For the math impaired, you could have it do calculations, or give voice cues as to what the roll is concerning to have lookups done against things like challenges or hit tables.  As the numbers roll in, the DM applies them to his sheets as required.

Of course, what I really want is an engine that develops over time, doing the lookup / performing the action, based upon hand macros (i.e. somatic components) and voice commands (i.e. verbal).  If one wanted to get really fancy, requiring material components could be a blast.

One can cast sleep by sprinkling salt (and calling it sand) into a cup (or on the floor if you don't have to clean up) while saying "Sandman Says".  You sprinkle the sand with the right hand, while doing a falling rain finger dance with your left.  The DM rolls the goblins save, fails, and you live another day.

You could imagine the setting could expand to permit a player or two at each participating location, so it doesn't have to just be each person in their own box.  But from a marketing standpoint, the game is launched with a bench of celebrity dungeon masters.  You get the idea though.

Eh, whatever, the phones are getting so powerful and voice and motion nearly come of age, I want to cast cyberspells by wearing a rig and speaking jibberish and making insane motions with my hands while on the metro.
from: will Ø @ 7:07 AM No comments:
Email ThisBlogThis!Share to TwitterShare to FacebookShare to Pinterest
Newer Posts Home
Subscribe to: Posts (Atom)