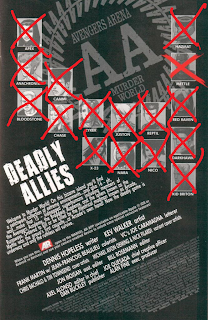 In this weeks +Geek & Sundry vlog (below), +Amy Dallen asked for our thoughts on the title Avengers Arena

Ok, I've got opinions. I did not enjoy this title. Granted, I did not read Avengers Academy, so many of these characters were unfamiliar to me. The death sport aspect was derivative and cheap. Gert's death hit me because it wasn't a common occurrence. She was the character one could easily see themselves in. In this title, threat of death is common. But we also are left with the distinct impression that the kids are in a simulation of some sort. Those that die in the game are likely being removed from the Marvel continuity, but...

Truth is anyone who is born one day dies. Part of the appeal of superhero comics, along with religious mythologies, transhumanism and just plain wishful thinking, is the fantasy that death isn't the end. That the story just keeps going. We are supposed to get the impression that this title is going to address this, but it hasn't, and I'm afraid it won't.
from: will Ø @ 6:17 PM
Email ThisBlogThis!Share to TwitterShare to FacebookShare to Pinterest